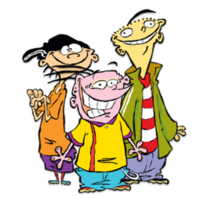 Ed, Edd n Eddy follows the lives of "the Eds", three preteen boys who all share variations of the name Ed, but differ greatly in their personalities: Ed (voiced by Matt Hill) is the strong, dim-witted dogsbody of the group; Edd (Samuel Vincent), called Double D, is an inventor, neat freak, and the most intelligent of the Eds; and Eddy (Tony Sampson) is a devious, quick-tempered, bitter con artist, and self-appointed leader of the Eds. The three devise plans to scam the cul-de-sac kids out of their money, which they want to use to buy jawbreakers. However, problems always ensue, and the Eds' schemes usually end in failure and humiliation.

The cul-de-sac kids do not include the Eds as part of their group, making the trio outcasts. The group of kids consist of: Jonny 2×4 (David Paul "Buck" Grove) is a loner whom his peers consider to be a nuisance, and spends most of his time with his imaginary friend, a wooden board named Plank; Jimmy (Keenan Christensen) is a weak, insecure, and innocent yet accident-prone child, who is most often seen spending his time with Sarah (Janyse Jaud), Ed's spoiled and ill-tempered younger sister; Rolf (Peter Kelamis) is an immigrant, who often participates in unconventional customs; Kevin (Kathleen Barr) is a cynical and sardonic jock who detests the Eds, particularly Eddy; Nazz (Tabitha St. Germain; Jenn Forgie; Erin Fitzgerald), usually seen with Kevin, is a stereotypical dumb blonde and an unattainable love interest for the cul-de-sac kids. All of the cul-de-sac kids share a common fear of the Kanker Sisters, Lee (Janyse Jaud), May (Erin Fitzgerald; Jenn Forgie), and Marie (Kathleen Barr), three teenage girls who live in a nearby trailer park and are in love with the Eds.

Aside from the Eds, the other cul-de-sac kids, and the Kanker Sisters, no other characters appeared in the series until the fifth season, when the silhouettes of other people were occasionally shown, and in "Mission Ed-Possible", the arms of Eddy's father and Ed's mother were seen. In the series finale, Ed, Edd n Eddy's Big Picture Show, Eddy's adult brother (Terry Klassen) was seen for the first time, making him the only non-main character, and the only adult character to ever fully appear on the show.

The series took place mostly within the fictional town of Peach Creek, and new locations were rarely introduced. The first four seasons of the show are set during a seemingly endless summer vacation, though from the fifth season onwards, the characters are shown attending junior high school in the fall and winter months.